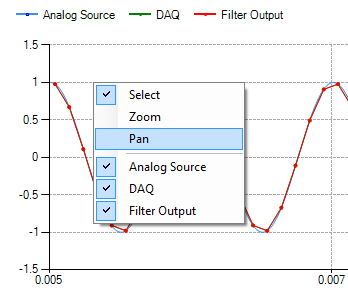 Microsoft Chart (MSChart) in Visual Studio is a great Windows Forms (WinForms) controls to create chart for standalone application. However, there are several features that could be added and improved to make this controls more user friendly.
Zooming and panning are two common feature for chart when dealing with large amount of data. Unfortunately, there are no easy way to have these two features enabled with MSChart. Although there is a built in Zoom controls, it is not very user friendly which described below. On the other hand, panning is not available. Search around web but didn’t find any reliable solutions.
I tried to implement these two features in MSChart by writing custom codes and YES it is possible. Instead of copy and paste the same piece of code over and over again to every single project that I need, I created this MSChart Extension class which put all these additional features in a separated assembly which can be simply add as reference when needed.

MSChart has a known problem which impact most of the users which is the speed of clearing data points. This become worst when dealing with large amount of data. Workaround for this solution had been published by Microsoft and users around the web to fix this problem. (Original Link)
An extension method of this function is implemented in MSChart extension as below.

Note 1: I added one additional line Points.Clear() at the end of the function to ensure the chart axis updated correctly on next plot. Without adding this line, I observed that previous axis settings will be used when plotting new data points right after calling ClearPoints().
To use this feature, one just need to call ClearPoints() from chart series.

This is a improvement version of zoom control with zoom out (full view) instead of using built in zoom control in MSChart. The main reason for recreate this feature is because zooming out is really a pain where need to zoom out each axis separately by clicking a button on the axis by number of time that I zoomed in. Moreover, the built in controls does not seems to works well with annotations.
Notes: Zoom out function is available in pop up menu when chart is zoomed.

Panning allowed user to move zoomed window using mouse. This is much better than moving the horizontal and vertical scroll bar.

Sometimes it is necessary to plot chart with multiple series for data comparison. However, it would not be easy to visualize the data for each individual series when we have multiple series overlapping each other. Show and hide series function provide a flexibility to hide each series as you wish. MSChart extension will automatically detect number of series used in chart, no setup is required to use this feature. Each series can be hide / show from context menu.

Extensions methods to create chart annotations are added in Version 1.2.0 as below.

To use this extension package, simply add MSChart assembly to reference of the project. Additional features and dedicated context menu can be enabled by the following function call.

MSChart Extension come with a built in pop up menu which allow user to use features such as zoom and pan controls during run-time. All functions such as zoom, pan, select and series hide / show can be access from context menu. This context menu is shown when right click mouse in chart with Zoom and Pan controls enabled as show above.